Title  :  The Inhuman Doctor – A case of Child Labour

Amit Kumar Gaur (s/o Mr. Deen Dayal ) is a resident of the village Duwar Khurd in Lalganj block of Mirzapur district . He is a twelve year child working as a domestic worker at the clinic of Dr. Ansari in the village Duwar Kala since last two years.

Meera and Sukhwanti, members of CPC, came to know about the case of Amit during a discussion in the village. They raised the issue in the CPC meeting. It was decided at the meeting that two CPC members will meet Dr. Ansari and get the details.
It is to be noted that CPCs were formed in 210 villages of  Hallia and Lalganj blocks  under Child Rights Project being implemented by Arthik Anusandhan Kendra Mirzapur and supported by Unicef  Lucknow.

In October 2012, Meera and Sukhwanti went to Dr. Ansari’s clinic along with several other members of the community.  Initially, Dr. Ansari refused to admit that the child is working there. Instead, he said that the child comes to learn medical science. But, the  CPC members  pressurized the doctor by saying that they are aware of the reality. They communicated that is a legal offence to make a child (below 14 years) work as a child labour and also it is against humanity. They told him to enroll the child in a school and take the responsibility of sending the child regularly to the school. They threatened the doctor of taking the matter to the police if their demands are not accepted by the doctor.

Thus, this case is about a doctor who is supposed to serve the community or rather humanity is indulging himself into an act which is nothing short of being inhuman. A doctor who does the treatment of  the patients  himself needs a treatment from the community. It also reflects the insensitiveness of the community towards child friendly issues.

Sensing the volatile situation, the doctor accepted the demand of CPC members. Admission of the child was done in primary school and the child goes regularly to the school. Hence, a child was freed from child labour and linked to school. 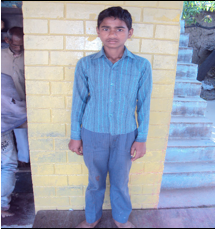