Details :  Om Prakash passed class 5 in the year 2010. He was a drop out since last two years. This summer, he went to do work outside the village with some villager. His parents called him back in July 2012 for his enrolment in school. But, he was not ready to continue his studies. He got addicted to intoxication.  Whenever his parents tried to persuade him for enrolment, he used to run away from home. His parents were too much worried.

He participated in the child group meeting in July 2012.  When Mr. Sandeep Kumar, AAK staff came to know about the child, he met his parents. His parents told him their problem.  Then, Mr. Sandeep met the child separately and tried to communicate the importance of education and harmful effects of intoxication.  After a prolonged discussion, the child understood the importance of education and he agreed to continue his studies. He was enrolled in an Inter college of Lalganj in July 2012. Now, he goes to school regularly.

Conclusion :  Hence, a drop out child was linked to school by understanding the importance of education. 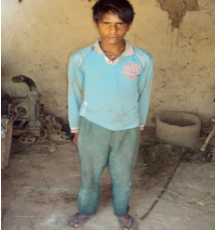